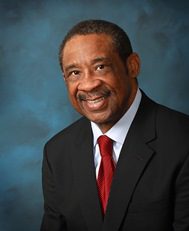 Retired IAM General Secretary-Treasurer Robert Roach, Jr., will be the new President of the Alliance for Retired Americans, a national organization that advocates for the rights and well-being of more than 4.4 million retirees and their families.

“I am honored and excited to be joining the Alliance for Retired Americans,” said Roach. “Older Americans are paying record-high prices for prescription drugs and extremists in Congress are again trying to cut the earned Social Security and Medicare benefits seniors need. Educating and mobilizing retirees is more important than ever and I am excited to join the Alliance team.”

Roach was elected President to succeed Barbara Easterling and Joseph Peters, Jr., was elected Secretary-Treasurer to succeed Ruben Burks at a meeting of the ARA’s Executive Committee. The actions will be effective October 1, 2015.

“Throughout his working career, Robert Roach, Jr., has been at the forefront of the fight to protect pensions and the retirement security of our members,” said IAM International President Tom Buffenbarger. “We are proud that Robert is going to continue that fight for retirees and the elderly as the Alliance of Retired Americans’ new president. He will be an effective advocate for our nation’s seniors who face some of the biggest challenges in more than a generation.”

The Alliance was founded in 2001 and has enrolled and mobilized millions of retired union members and other seniors and community activists into a nationwide grassroots movement. Retired IAM International President George Kourpias served as the Alliance’s first president.

“After decades of progress to make life better for retirees, our nation is in danger of going back to a time when workers feared retirement because it meant a life of poverty and struggle,” said Kourpias. “Robert Roach, Jr., will be a strong voice for our nation’s seniors as we work together to protect Social Security, Medicare, pensions and other programs that make retirement something to look forward to, not fear.”

For more information on the Alliance, visit www.retiredamericans.org.