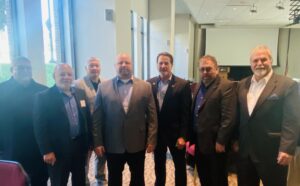 Leaders from the IAM Rail Division (including TCU Carmen Division and IAM District 19) participated in a three-day technology seminar conducted by the leadership of the Federal Railroad Administration (FRA), May 9th through 11th. There were various presentations and discussions ranging from the regulatory processes for technology testing, data handling, FOIA/redaction regs, the new infrastructure law, new Tier 3 braking systems, HazMat, greenhouse gas emissions technology, and others.

“We’re glad to see the FRA finally reaching out to the rail labor community to better understand our concerns,” said Josh Hartford, Special Assistant to the IP, IAM Rail Division. “Biden’s FRA Administrator Amit Bose has done a great job turning the FRA’s focus towards rail workers, and this meeting is just the most recent example of his efforts.”

FRA officials heard directly from labor representatives on a variety of issues, including: labor’s ongoing frustrations with FRA’s rubber-stamping of railroad waivers, allowing railroads to replace carmen inspections with various wayside scanners, locomotive inspections issues, new locomotive and car technologies, and many others.

Rail Division leaders pressed the FRA on brake testing and inspections as well as FRA data quality and public access. Rail labor has repeatedly expressed concerns over the accuracy of FRA data, since it is all self-reported from the railroads. Nevertheless, the FRA is planning to improve data accuracy and access so that labor representatives can more easily hold railroads accountable on data discrepancies.

TCU Carmen Division President Rich Johnson specifically pressed the FRA on their suggested waiver parameters on new Tier 3 highspeed trainsets. “It’s incredibly unsafe to have defective brakes on trainsets going out the door. The suggested 5-day window for fixing these power and brake assemblies is unacceptable to the Carmen Division as well as the general public.” FRA noted that these were draft proposals.

The 3-day meeting was a good opportunity for FRA career staff to directly from rail workers’ representatives on the real world impact of their work, and we hope these and future meetings will better inform agency officials in the months and years ahead.