IAM International President Bob Martinez made a major announcement by introducing the IAM’s new endorsement process for presidential candidates. For the first time in the IAM’s history, rank-and-file members will have a say in who the union endorses in 2020. The announcement made waves in the press, including a focus story that ran in Politico. 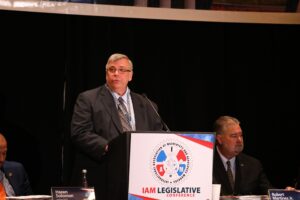 TCU Vice President & Legislative Director Ron Kloos spoke to the crowd on railroad issues, covering ongoing fights with Amtrak, Precision-Scheduled Railroading (PSR), and the continued effort to get adequate funding for the Railroad Retirement Board (RRB).

“We have a lot of issues moving through Congress right now, with conversations ongoing around Amtrak, freight rail operations, and a major infrastructure bill being debated,” said TCU President Scardelletti. “So I think it’s extremely important that our TCU folks come to the IAM’s Legislative Conference and make their voices heard on Capitol Hill.”

On both Tuesday and Wednesday, TCU officers, staff, and local chairmen lobbied Capitol Hill on these issues and more. Meetings were held with the offices of congressional leaders in charge of our issues like Senator Cantwell’s Commerce Committee staff, Senators Susan Collins and Jack Reed of the Transportation Appropriations subcommittee, Senators Jerry Moran and Steve Daines for supporting Amtrak long-distance trains and station agents, House Railroads Subcommittee Chairman Dan Lipinski (D, IL-3), and many others.

On Wednesday evening, the conference hosted the annual Congressional Reception, which set a record for attendance from over 50 Senate and House members. 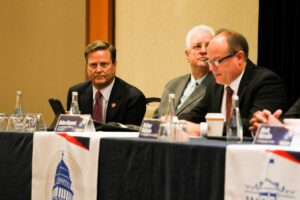 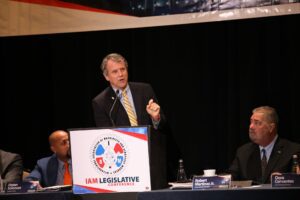