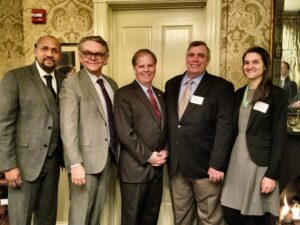 On Wednesday, labor unions joined together to host a reception in honor of newly-elected Senator Doug Jones of Alabama. Sen. Jones won a hotly contested special election in December over controversial candidate Roy Moore. He now takes over the seat once held by current Attorney General Jeff Sessions.

Rail labor – including TCU – invested early in support of Doug Jones, believing in his candidacy, the national mood turning against President Trump, and his stated support for rail worker issues. In addition, Republican candidate Roy Moore was largely a nightmare for union workers, and was espousing pro-corporate policies while painting himself as a working-class candidate (we won’t get into the disturbing allegations against him).

As a result, rail labor invested early and often. We educated our members with thousands of mailings, while spreading word throughout the ranks about Doug Jones’ support for rail safety, infrastructure investments, and Railroad Retirement. Senator Jones has been assigned to the Health, Education, Labor and Pensions (HELP) Committee as well as the Banking Committee.

TCU is proud to have supported Senator Jones and we look forward to working with him to enhance the lives, wages and retirement security for Alabamian rail workers.