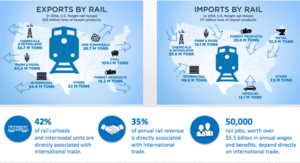 On Tuesday, the Association of American Railroads (AAR) sent a letter to leaders of the Congressional committees with trade jurisdiction. The letter urges them to consider the effect of renegotiating NAFTA on the railroad industry. AAR President Ed Hamberger wrote, “approximately 50,000 rail jobs and more than $5.5 billion in annual wages and benefits…depend directly on trade.”

The letter goes on to list some of the different products shipped by rail that could be heavily affected by poorly written trade agreements:

As you can see, the rail industry – and rail jobs – are heavily reliant on international trade. Profits generated from trade account for over a third of railroad jobs, and help pay for the wages and benefits that TCU has negotiated and won for our members.